To share your memory on the wall of Carolyn \"Cal\" (Bell) King, sign in using one of the following options:

She was stationed at Stewart AFB, Newburg, NY. It was there that she met and married A1C Harold (Hal) Lewis King, November 5, 1955. Although her time in the USAF was brief, she was very proud of her military service. One of the highlights was being involved as part of the Air Force wide team that started tracking Santa in 1955. She was honorably discharged prior to giving birth to the first of their four children. It was at this point she began a new career as an Air Force wife, dutifully joining Hal at his assigned stations in Europe, up and down the East Coast and in Midwest. During this time, she belonged to and or led numerous NCO Wives Clubs. Cal also held many part-time jobs throughout her life, from administrative assistant to several retail positions and she even started her own cake decorating business after graduating from the Wilton School of Cake Decorating in Chicago, in 1971.

Upon retirement, Hal & Cal moved the family to a "neutral" location (Hal a diehard NY Yankees fan and Cal a lifelong Boston Red Sox fan) in Essex Junction, VT where they settled to raise their family. Cal loved being with people, especially children. Her passion was teaching children all ages how to decorate cakes, create gingerbread houses and panorama sugar eggs. She was well known to many of the Chittenden county recreation departments as the "Cake Lady". Her talents sparked enough interest that she was interviewed on the local television program, "Across the Fence", several times throughout the 70’s & 80’s.
Cal is survived by her brother Robert Bell, wife Carly; daughters Valerie Rittershausen, husband Paul, Karen Celia, Heather King and son Alan R King, wife Kelly. She also leaves behind 13 grandchildren and 16 great grandchildren plus numerous nieces and nephews and several close family friends. She was pre-deceased by her husband Hal in 2008.

The family would like to express special thanks for the loving care given to Cal by: Mansfield Place Staff, the UVMMC Dialysis Team, SSTA Drivers and the UVMMC Home Health Care & Hospice Team. She was treated like a queen and appreciated each and everyone of these team members!

A zoom celebration of her life will take place at 2pm on 6 June 2021, please join us at https://mailchi.mp/alcvt.org/cal-king-memorial-service Internment for both Cal and her husband Hal will be later this fall at the Vermont Veterans Cemetery in Randolph, VT. Memorial contributions in her memory can be made to the Red Sox Foundation (https://www.redsoxfoundation.org/donate/) or The Vermont Military Museum at 789 Vermont National Guard Road Colchester, VT 05446-3099...e-mail Museum Admin at museumadm@gmail.com. Please direct any inquiries to Karen Celia at 802-233-9442.
Read Less

We encourage you to share your most beloved memories of Carolyn "Cal" (Bell) King here, so that the family and other loved ones can always see it. You can upload cherished photographs, or share your favorite stories, and can even comment on those shared by others.

Countless family celebrations included unique, memorable, delicious cakes from your mother... Our family recently lost our mother at age 91- I share the depth of your loss, yet also the satisfaction of having a wonder mother. Love and Blessings on a Life Well Lived Cal.

Posted May 22, 2021 at 11:37am
I met Cal King in the 70s when I interviewed her for a story about her wonderful cake baking for the Burlington Free Press. Her cakes were wonderful and she was so friendly. A few years later, when I got married, I hired her to bake a wonderful mocha cake with marzipan fruits topping and delicious sandwiches. Her food was a great hit! Just thinking of her the other day and remembering her funny story about a partial wedding cake collapse as she was driving on the then rough-and-bumpy Marble Island Road to a wedding! Very nice lady, so sorry for your loss. Deborah Stearns Sullivan, Venice, FL
Comment Share
Share via:
AH

Posted May 19, 2021 at 04:59pm
The entire staff of A W Rich Funeral Home wishes to express our deepest sympathy to you and your entire family during this difficult time.
Comment Share
Share via: 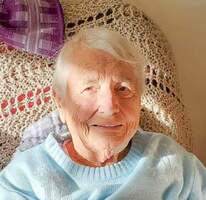