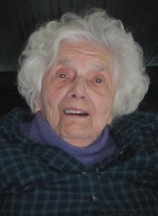 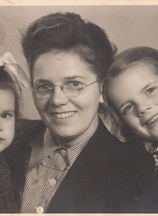 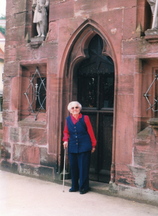 Memorial Candle Tribute From
A W Rich Funeral Home
"We are honored to provide this Book of Memories to the family."
View full message >>>
In Memory of
Liesel Katherine
Ziegler
1913 - 2010
Menu
Send Flowers

Katherine Louise Loetterle, nicknamed Liesel by her parents Katherine and Christian Loetterle, was born in Calw, Germany in 1913. She was the fifth of eight children and had five brothers and two sisters.

Liesel lived through a difficult and economically devastating era in Germany, growing up in the wake of two World Wars. She lost her father to WWI when she was only 4 years old. At age 26, Liesel married Emil Georg Ziegler, a close friend of her brothers, just before he left to serve in WWII. Fortuitously, he was called back from the front lines in Poland due to his proficiency as a machinist, and Liesel and Emil went on to have two daughters, Elfriede and Heiderose.

She studied to be a seamstress and was fastidious and industrious in her work, making a career for herself during the Great Depression. She worked in the linen department at the hospital in Calw, and made outfits for her daughters when material could be found.

Liesel immigrated from Germany in 1957 with Elfriede and Heidi, joining husband Emil in Winnipeg, Canada where she went to night school and learned to speak English fluently. Together they moved to New York City in 1959. Once there, Liesel started on a new career path, taking an accounting course, and working in the accounting department at Kresge in Manhattan until she retired.

In her retirement years, Liesel -- or Oma (grandmother) as she came to be known -- called Jeffersonville, Vermont home. She was loyal, hardworking, and duty bound to her family, helping day and night to take care of her grandchildren and pitching in wherever she could to help with the operation of the Deer Run Motel (built by her daughter Elfriede and son-in-law Ernst Halbig). She was involved in local bible studies and attended both the Waterville Church of the Nazarene and the Second Congregational Church in Jeffersonville.

Visiting hours will be held on Friday, October 22, 2010 from 5:00 – 7:00 p.m. at A.W. Rich Funeral Home – Essex Chapel. Funeral services will be held on Saturday, October 23, 2010 at 2:00 p.m. at the Second Congregational Church in Jeffersonville. Arrangements are by John D. Workman, A. W. Rich Funeral Home – Essex Chapel, 57 Main Street, Essex Jct., VT 05452. The family invites you to view a full notice and leave your online condolences by visiting www.awrichfuneralhomes.com.