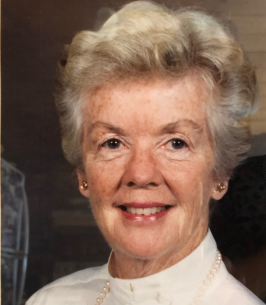 Shelburne, Vermont - Joanna (Durand) Orton Jensen, 95, of Rahway, New Jersey and Fairfax, Vermont passed away on Sunday, August 21st, in Shelburne, Vermont. Born March 5, 1927 in White Plains, New York, her parents, Genevieve (Letson) and Edwin M Durand, soon moved to Rahway where she attended Lincoln School, Rahway High School and New Jersey College for Women (now Rutgers). In 1947 Joanna married Stuart Orton, who, having served in WWII as a young Navy doctor, joined his father’s Rahway medical practice with his brother. Besides helping with the office, the Rahway Hospital Women’s Auxiliary and joyously raising their only child, Sara, Jo and Stu embarked on 47 years of weekend commutes to Fairfax Vermont, establishing a farm with Angus cattle and Shropshire sheep on 100 acres of land on the Lamoille River. Together they would found the Fairfax Historical Society in 1964, raise an endowment for perpetual care for the Fairfax Plains Cemetery abutting their land, and eventually open Glenorton Country Antiques in the barn They also sailed Barnegat Bay, NJ, cruised the Maine coast, and twice took their boat up the Hudson River, through the locks, into Lake Champlain, sailing up to St Albans Bay. In retirement Jo and Stu finally gave up the farm, moved to Burlington’s New North End and wintered in an Airstream at Traveler’s Rest in Dade City, Florida.

Joanna’s personality was one of boundless grace, positivity and a great sense of humor. She was an artist and executed traditional crafts with tremendous talent. Jo was an accomplished theorem painter, she knitted complicated cable knit coats and sweaters for all of us, and in later life took up silver smithing at Wake Robin. In the 1970s she became a master of primitive rug hooking, one appearing on the cover of the seminal book, “The Basics of Rug Hooking” by Beatty and Sargent. The New Bedford Whaling Museum, upon her death, has acquired one of Joanna’s rugs, “New Bedford in 1810” for their collection.

After Stuart Orton’s passing in 1994, Joanna married Per Jensen of Speculator, New York. Together Jo and Pete enjoyed many years of road trip adventures, wintering at Travelers Rest and European travel. A highlight was visiting Pete’s place of birth in Norway and reconnecting with an exchange student from Lillehammer Jo and Stu had hosted in Rahway. After Per Jensen’s passing in 2009, Joanna moved to Wake Robin in Shelburne, Vermont, where she happily spent the remaining twelve years of her life.

Joanna is predeceased by her brother William Durand and leaves her brother Fred Durand. She leaves her devoted daughter, Sara Orton Glickman, her doting “favorite son in law” Carl Glickman, her beloved granddaughters Jennifer Stapper and Rachel Glickman, their wonderful husbands Volker Stapper and Henry Zacchini, her bright and talented great grandchildren Lea Stapper, Noah Stapper, Amelia Glickman and Clara Quinn Zacchini, and many nieces, nephews and cousins. She loved you all.

Joanna Orton Jensen’s ashes will be interred in the Orton plot in the Fairfax Plains Cemetery in a private ceremony with Rev Susan Cooke Kittredge attending. On a date TBD next summer there will be a “Circle of Remembrance” at the same location.

In lieu of flowers donations in memory of Joanna would be gratefully received by the Fairfax Historical Society toward renovations of their museum on Main Street. Checks may to sent to PO Box 145, Fairfax, VT 05454. Please visit awrfh.com to share your memoires and condolences.