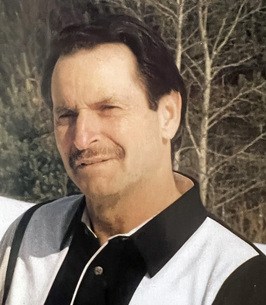 It is with deep sadness that the family of Rosaire Poginy announces his passing on July 27th, 2022, in Newport Vermont, surrounded by his loving family, after a long battle with lung disease.He has been called home by God and the angels to enjoy his well earned peace and happiness.

Rosaire was born to Leon and Laura (Poutre) Poginy at the Cottage Hospital in Barton, VT., on October 8, 1945. He was the 8th of 12 children. Rosaire grew up on the family farm on May Pond in Barton. He married his wife, Katherine (Lenton) on March 6, 1965. He attended St. Paul’s school in Barton, VT. He had a love for meat-cutting, so in the spring of 1968 he attended the National School of Meat Cutting in Toledo. From there he worked 9 years at the White Market meat department in Lyndonville, VT., as well as running his own custom meat shop in Wheelock, VT. His wife Kathy decided to advance her education and become a teacher, so Rosaire stopped working to be a stay-at-home dad helping raise his daughters. He continued to run his own meat cutting operation from his home on May Pond Road. He enjoyed
chopping firewood to keep his family warm during long cold Vermont winters.

Rosaire had a true passion for spending hours in the woods and enjoying nature’s beauty. He was a master at dropping any tree that needed cutting. It didn’t stop there, though. He saw so much in the natural beauty that wood holds and spent multiple hours in his garage working on wood pieces that held unique markings. He would carefully sand and polyurethane them into a decorative piece that he took a great deal of pride in. He loved sharing his wood art with family
and friends.

He also had a green thumb for gardening, and provided a bountiful garden of vegetables for his growing family. He was one of Vermont’s backyard maple producers who took a great deal of pride in making golden delicious syrup.

One of his greatest achievements in life was choosing his family over his addiction to alcohol. For the past 39 years, he never went back to drinking. Rosaire’s philosophy of life was to always be honest and kind, and to help the more vulnerable. He truly wanted to help (as he put it) “the underdog”. As he progressively became more ill, he loved to spend his days riding around and taking pictures of scenery with his grandchildren, while taking in all the beauty that Vermont back roads offer. Rosaire has been referred to as a colorful character; he certainly left his mark on this world!

Rosaire’s obituary will also be posted on the following site, which includes a Memory Wall to post condolences: www.awrichfuneralhomes.com.

A celebration of life will be held on August 4, 2022, 2:00pm, at the Eastside Restaurant in Newport, Vermont.