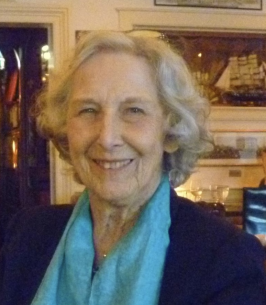 Miriam "Mimi" Langdon, 100, died at Berlin Meadows in Barre, Vermont on July 22, 2022. Born on January 30, 1922 in Connecticut, Mimi’s early years were spent in Black River, NY. While she and her husband, Red Langdon, spent much of their lives in Rochester, NY and in Fredericksburg, VA, they were summer residents of Clayton, NY. They renovated their Clayton home on the St. Lawrence River into a year-round residence they shared until Red’s death. This home served as the family gathering space for her children, grandchildren, and extended family for years. Ultimately, Mimi moved to Vermont to be closer to her son and daughter-in-law. She was proud to call herself a Vermonter during the last two decades of her life.

While Mimi’s focus was on raising and caring for her family, she pursued many artistic paths in her earlier years: painting with watercolors, sketching, stenciling, quilting, and needlepoint to name a few. During her years in Clayton, she was regularly active in the classes and activities of the Thousand Islands Craft School (now the T.I. Arts Center). She maintained a keen interest in world events and politics and prided herself on staying informed on what was going on around her.

Mimi maintained close ties with all of her grandchildren: Liam, Maren, and Elizabeth. Her great-grandchildren, Gracelyn and Oliver, gave her great joy. Unfortunately, she was not able to meet John, her third great grandchild, born one month prior to her death.

Mimi was predeceased by her father, Ernie Welt (who died when Mimi was a small child); by her mother Gladys Meier Welt Lewis and her stepfather, Paul Dewey Lewis, of Clayton; by her husband, John (Red) Langdon of Clayton; and by her sister, Jane Welt, also a centenarian. She is survived by her son Richard Langdon (Elaine) of Middlesex, Vermont; her daughter Jane Looby (Michael) of Pittsford, NY; her grandchildren Liam Looby (Marin) of Madison, WI; Maren Langdon Spillane (Dominic) of Northfield, Vermont; Elizabeth Looby (Turki Alghamdi) of San Jose, CA; by her three great-grandchildren, Gracelyn and Oliver Spillane and John Looby; and by nieces, a nephew, and many cousins.

A graveside memorial will occur at Grove Cemetery in Lafargeville, NY at a later date.