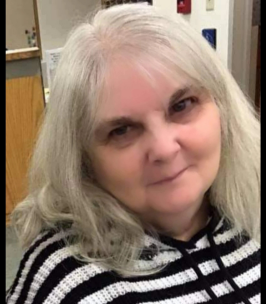 Holly Ann Martel, most recently Coventry, was welcomed into Heaven as her time here on earth ended and her new life with the Lord joyfully began on June 22nd 2022, after a long, but brave battle with cancer. Holly was born on August 30th 1956, at the Orleans County Memorial Hospital in Newport, VT to Slayton and Patricia Marsh, joining her two older sisters, Vicki and Nancy. Holly’s first four years of life were spent in Orleans, when the family moved to Holly’s favorite place on earth, Brownington. There she attended elementary school, followed by Lake Region High School where she met and fell in love with Enoch J. Rowell III. Holly exchanged her schoolbooks for motherhood and homemaking. She later proudly received her GED.

Holly’s true calling as a mother was obvious as she and Enoch became parents, to Enoch IV (EJ) and Seth Rowell. As life often changes, Holly and Enoch parted ways. Holly later married Tom Martel, and they lovingly welcomed a daughter, Mercy Ann. Her love for her children and her family were her life. Holly instilled strong family values in her children, which since has been shared with her 11 grandchildren and 5 great-grandchildren. She was very instrumental in caring for her growing family, and nothing mattered more than their well-being, happiness, and love towards one another. Each generation of children are best friends and that warmed her heart. Her love of family could only be matched by her love for God and His promise of Heaven for those who believed and practiced his teachings.

She was predeceased by her parents Slayton and Patricia Marsh, her oldest sister Vicki Marsh, and her son’s father Enoch Rowell III.

A private service will be held at the discretion of the family per Holly’s request. We will always remember her smile, her love for chocolate, her quiet, giving, and humble demeanor. Memorial contributions can be made in Holly’s name to Orleans Essex VNA/Hospice as they provided exemplary care and compassion for her and her family.

The family invites you to share your memories and condolences by visiting www.awrfh.com.