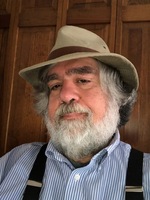 Born in Bryn Mawr, PA on May 4, 1961 (Yes, he was a Star Wars fan!), John was raised in Berwyn PA, the youngest of three brothers. He graduated from Conestoga High School, Berwyn, PA in 1980 followed by Widener University, Chester, PA in 1987. He lived in Phoenixville, PA and worked in Human Resources at Anro Printing in Devon, PA until his move to Vermont in 2001 where he eventually settled in Fletcher. He continued working in Human Resources at Hannaford in Morrisville, VT. John was a life-long learner and continued his education at Champlain College earning certificates in Paralegal Studies and Accounting. This enabled a change of careers and in 2011 he secured employment as an auditor with the State of Vermont Department of Labor where he worked until his death. For the joy of learning John took and passed a community college anatomy and physiology course in Fall 2021 with students one-third his age!

John appreciated music of all genres but especially enjoyed classic rock which was almost always playing when he was home. The Grateful Dead, Todd Rundgren and Bruce Hornsby were among his favorites.

A memorial service will be held on Saturday, June 4, 2022 at 11am at the Binghamville Methodist Church, in Fletcher, VT with the burial immediately following in the Binghamville Cemetery. Memorial gifts may be made to either the McClure Miller Respite House, 3113 Roosevelt Hwy, Colchester, VT 05446, https://www.uvmhomehealth.org/hospice-care/mcclure-miller-respite-house/ or the Pancreatic Cancer Action Network at https://www.pancan.org/honormemorial-gifts/.