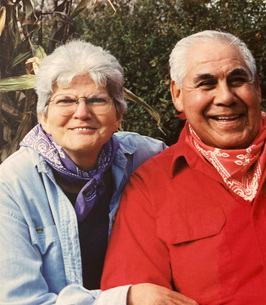 Ada Mae, was born in Fairfax, Vt. on July 19, 1933. She was the daughter of Dean and Maude Blake.
Ruben Gilbert, was born in Brownsville, Texas on September 15, 1934. He was the son of Ismael and Juanita Olivarez.

After Ada graduated from BFA high school in Fairfax, Vt. she worked at the Howard Bank in Burlington, VT. Ada and Ruben met in Burlington and were married on February 28, 1953. They became the proud parents of 2 children. Gilbert and Maria Elena Olivarez.

Ruben was a Military Policeman in the USAF. He started his military career walking the flight line at Fort Ethan Allen, in Colchester, Vt. Ruben, served his country in Law Enforcement and security. He was in Air Defense command, Strategic Air Command, and the Bomarc Missile site. Ruben was stationed at Fort Ethan Allen, Otis AF base, Plattsburgh and Suffolk County AFB. He was also stationed in Germany, France and Vietnam, during his career. He received an honorable discharge in August of 1972, after 20 years of service.

Following his military retirement, he was employed at UVM in the maintenance department. Ruben retired from this position after 20 + years.

Ruben, was an active member of Essex Alliance Church. He served as trustee, deacon, usher, Sunday school teacher, bible study leader, also involved in men’s group and marriage groups. He worked in the nursery during the MOPS program. Ruben, was a team member on Cursillo week-ends, as well as, Tres Dias week-ends.

He was a dedicated husband and father. Ruben lovingly/selflessly/patiently was Ada’s primary caregiver, as her dementia unfolded and took over their lives. He knew this was his God given responsibility and he didn’t shrink back from it, even when it became harder by the day.

He easily, became HERO, to many of us, as he walked in his quiet and gentle ways, one day-one challenge at a time. He gave testimony of his faith by his devotion, not only to Ada, but also to his Lord. He rarely had to use words-his heart was revealed in his care and support of Ada.

Ada, enjoyed being a homemaker and a mom. She encouraged and supported her children in school, as well as in their Scouting activities.

Ada, was an active member of Essex Alliance church, she served as a Sunday school teacher, a deacon, held an office in Aglow, was a member of a Christian counseling Network Board, she started a Recovery/Support Ministry, was a team member with VT Cursillo, a Spiritual Director at VT. Tres Dias, a mentoring mom, a Den Mother, a Girl Scout leader — this is only a partial list.

Ada, often spent time mentoring women from all walks of life. She was gifted with a heart that listened long and understood the importance/ and gift of being heard and cared for.


Ada and Ruben both enjoyed visits to the Amish country, sometimes alone but most often with their adult children. Quilts, buffets, fabric, beautiful country sides, and last but not least, SHOO-FLY PIE! Memories made and treasured by all.

Ada and Ruben are survived by their two children-Gilbert and Maria Elena Olivarez. Gilbert and his wife Vicki live in Hollis, Maine, four granddaughters, Theresa M. Upstil and her husband, of Canterbury N.H., Sharon A. Miller of Biddeford, Maine., Melissa A. Olivarez of Biddeford, Maine, Heather L. Emery and her husband Timothy of Waterboro, Maine, 13 grandchildren and 3 great grandchildren

Ruben has two sisters in Texas, Leonor Olivares and Maria Elena Olivares, as well as, many nieces and nephews. Ruben had three brothers who predeceased him. Augustine Olivares, Ismael Olivares, Mike Olivares.

All of Ada’s siblings predeceased her, Charles Blake, Dean Blake, Nora Blake Allen, Ada has many nieces and nephews.

A celebration of Life service for both Ada and Ruben Olivarez will be held held at Essex Alliance Church, 37 Old Stage Road Essex, Jct. on June 15 at 11 am. Inurnment will be at the VT Veterans Memorial Cemetery, 487 Furnace Road in Randolph Center on June 16 at 11 am.