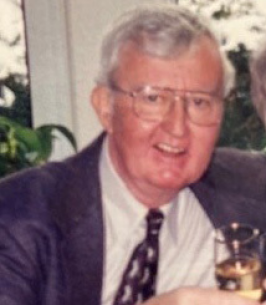 Chandler Davis Nims, son of Russell and Ruth Nims, was born in Barre, VT, July 31, 1937. His early years were spent in Jeffersonville, VT ... those years always remained close to his heart. Moving to Montpelier, VT with his parents and younger brother, Bob, as a middle-schooler, he attended and graduated from Montpelier High School. He furthered his education with a full scholarship to Middlebury College and then Rutgers University, obtaining his Masters Degree in accounting.

Chandler (known as Chan by many), got his first job as an auditor at National Life Insurance Company where he met his future wife, Ellen. During the next five years, they became proud parents of two daughters, Cathy Lee and Cheryl Marie, eventually settling down in Essex Junction, VT where Chandler became employed by IBM, retiring from there after 32 years. During the years there, Chan made numerous friends, many of whom he kept in close touch. Because of his propensity for socializing, he especially enjoyed his later years with lunch get-togethers along with his fellow co-workers at Hoagies!

Chan was always sports-oriented, playing many years of softball, where he was well-respected as one of the best pitchers in the State. He was so proud of his many trophies and newspaper write-ups to prove it! He enjoyed many years of running road races throughout Vermont and even ran and completed a half-marathon in Bar Harbor, ME, thrilled by this accomplishment! For many years, he and Ellen held season tickets to the UVM men's basketball games which they both immensely enjoyed attending and cheering them on!
Chandler served as a member of the VT Air National Guard, from which he was honorably discharged. He was involved in serveral philanthropic organizations, including JayCees, Fraternal Order of Elks, and the American Legion, Post 91. He and Ellen were long-time members of the Congregational Church (United Church of Christ) in Essex Junction. He served on numerous boards, including a stint as Chairman of the Board of Trustees.
Chandler is survived by his beloved wife of 61 years, Ellen; his most-beloved daughter, Cathy Lee Carper; brother, Robert (wife Marilyn); very special grandchildren, Brendon (partner Kristen); Bryon; Brynna-Lee, her son and his great-grandson, Soliman; niece Abigail Nims (and her family); nephew Anthony Nims (and his family); numerous cousins, as well as his precious BFF kitty, Maggie. He also leaves many family members on Ellen's side of the family. Chandler was pre-deceased by a very beloved infant daughter, Cheryl Marie, as well as his parents.

The family wishes to thank SilverLeaf In-Home Care and their conscientious staff; the wonderful staff of UVM Home Health and Hospice; and the staff of the McClure Miller Respite House which provided so much loving support for Chandler and his family.

In lieu of flowers, and if so desired, memorial contributions in his name may be considered to the McClure Miller Respite House or the Humane Society of Chittenden County.

No services are planned and a family gathering will be held in the late spring or summer to honor and celebrate Chandler's life.