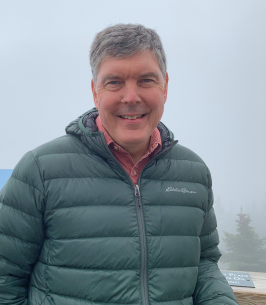 Essex - Douglas J. Underhill, 58, passed away suddenly on January 28, 2022, at Smuggler’s Notch in Jeffersonville, VT due to a sudden cardiac event. He was born on July 21, 1963, in Endicott, New York son of Mary Lou and the late John Underhill. Doug married the former Kim Newton on April 4, 1987, in Burlington, VT. He graduated with honors from Adirondack Community College with an A.S. Computer Science Degree, and then from University of Vermont with a B.A. Mathematics (Computer Science Minor). Doug had been employed by Flexaseal in Williston for 3½ years as a Database Administrator. He was nicknamed Impact Doug for his brilliance with unwieldly projects and the impact that those projects had on the company. He consistently helped to make impossible things happen. He will be truly missed by all those who knew and loved him.

Doug loved God, his wife, and his two children. He was family oriented from childhood until his passing and enjoyed spending quality time with his parents, siblings, nieces and nephews, and in-laws. Doug was creative and passionate about music, pottery, macrame, and most recently making potholders, which he enjoyed giving to others. He stayed active with disc golf, adventure nature walks with Kim, and prior to the pandemic Kim convinced him to attend weekly step aerobics classes together. Doug loved doing puzzles, playing games, and watching movies and was a true Trekkie (Star Trek Lover) through and through. Kim and Doug met for the first time attending a Genesis concert together and their love for this band never diminished throughout their marriage. Doug was often found enjoying a mug of hot tea and he even was known for bringing tea bags when he visited people to ensure that he would have a quality cup of tea. He was passionate about volunteering in Essex Alliance Church throughout his life including playing guitar for the worship and arts team, singing in the choir, performing in many Christmas Spectaculars, marriage mentoring for couples being wed at the church, governing board, nominating committee, and most recently found a passion for helping to lead the Night to Shine event, which honors people with special needs.

Doug was known for his kindness, generosity, dependability, unconditional love extended to others, his gentle spirit, warm smile, and the twinkle in his bright blue eyes. He was always the calm in the storm for everyone around him and could always bring laughter when it was needed most. Doug made others feel at ease and his kids often joked about how many strangers he would so easily strike up conversations with. He loved children and was a kid at heart himself, always making silly animal sounds like his elephant or cow noises, running around with his arms extended out like he was an airplane, and watching animated movies with his kids. Each year, Doug enjoyed his family vacations to the beach with Kim, Kendra, and Brandon, and could be found body surfing in the waves or laying out soaking up the sun, and it wouldn’t be family vacation without a competitive game of mini golf.

Doug was predeceased by his father John A. Underhill, and stepfather F. Ray Keyser, and parents-in-law Don and Pat Newton.

There will be a Celebration of Life Service at Essex Alliance Church on Saturday February 12, 2022, at 1pm with reception to follow. Memorial donations in Doug’s memory may be made to Essex Alliance Church, checks may be mailed to 37 Old Stage Rd, Essex Jct., VT 05452. Please write in the memo field if you would like your donation to go to the Night to Shine Fund or Worship and Arts Department.