To share your memory on the wall of Gilbert LeClair, sign in using one of the following options:

Gilbert was born at home on December 3, 1950, in Charlotte, VT, of French-Canadian immigrant parents, Rolland and Germaine (Bouchard) Leclair. He grew up in a large, Victorian house on a small dairy farm, the fourth of six children. Gilbert was independent and daring right from the start. There are many stories of his shenanigans growing up on the farm. When he was about 10 years old, he broke both of his legs in a hay baler accident. He wore full casts for the summer, even into the beginning of the school year. Gilbert healed well and became an expert skier later in life! During high school, Gilbert moved to the Plouffe farm in Charlotte to help on their farm. This was a great opportunity for him to work and become part of another French-Canadian family.

Gilbert graduated from Charlotte Central School and from CVU High School. He enlisted in the Navy and received training in Great Lakes IL, where he was first exposed to the profession of welding, as well as scuba diving. Upon his discharge from the Navy, he continued his vocation and became a most proficient and sought after welder (pipe-fitter). Gilbert worked as an underwater welder at many nuclear plants in the northeast. He also worked on the construction and maintenance of many buildings locally, including IBM, UVM, and the Ben & Jerry's factory. His brothers in the Pipefitters Union Local 693 were some of his closest friends and the source of his favorite stories.

Gilbert enjoyed many adventures on and below the water. He often fondly recalled his small ship sailing journeys to Bermuda and around the Caribbean. His own boats, Starbuck and Sea Rose, were points of great pride. He was an expert diver who enjoyed treasure hunting on the bottom of Lake Champlain and lobster hunting in Long Island Sound. He was quite comfortable in zero visibility water under several feet of ice, and installed quite a lot of pipe in these conditions.

Gilbert was the salt of the earth and content with the simple joys of life. In retirement, he took up hobby farming on his Westford land, affectionately called Nonconformist Farm. Some of his projects included raising birds, beehives, sugaring, gardening (including the best cannabis around!), logging with his Timber Talon and creating the most impressive stacked woodpiles. He was known for riding his horses, Onyx and Ben, into town to pay his taxes.

Gilbert’s only child, Kristin, spent most of her life with her mother and half-siblings in Chicago IL. A few years ago, Gilbert was very excited that Kristin decided to come back to Vermont and reconnect with her father. Gilbert’s family is most grateful and indebted to Kristin, as well as her partner, Tristan, whom Gilbert saw as a son. They have been here for him these last years, caring and giving meaning to his life.

Gilbert's friends and neighbors were a huge and very important part of his life; especially Gretchen Woërner, Yvan Plouffe, Johnnycat Adams, Tom Parker, Justin Morrill and the Trombleys. All who met Gilbert were instantly taken in by his smile and his stories. His big wide-brimmed cowboy hat was superseded only by his big heart. His free spirit and bravery in the face of every challenge he encountered in his life will always be an inspiration to all of us.

Gilbert is survived by his daughter, Kristin LeClair and her partner, Tristan Kading, of Jeffersonville VT, his brother, Gerald LeClair, South Burlington VT, his three sisters, Claudette and Harry Swett, Danville VT, Lorraine O’Brien, Lake Dallas TX, and Gisele Hathaway, Colchester VT, numerous cousins, most of them in Canada, one uncle and aunt, Roma and Noella Bouchard, St. Chrysostome QC, and several nieces and nephews. He is predeceased by his parents, Rolland and Germaine Leclair, and by his younger brother, Maurice, who died tragically in 1991, and Maurice’s twin brother, who died shortly after his birth in 1952.

Gilbert chose cremation. There will be no services at this time, but a celebration of his life will be held later in the year. The family requests that no flowers be sent. Those who wish to honor his memory may do so by greeting each other with a smile and kindness.
Read Less

Print
Gilbert chose cremation. There will be no services at this time, but a celebration of his life will be held later in the year. The family requests that no flowers be sent.

We encourage you to share your most beloved memories of Gilbert here, so that the family and other loved ones can always see it. You can upload cherished photographs, or share your favorite stories, and can even comment on those shared by others.

Posted May 03, 2021 at 07:15am
You were one of a kind! It was a privilege learning to weld with your guidance. It was a trip moving that sailboat down the road, only to have a tree down across the road as we were headed down the home stretch. That grin - one never knew just what mischief was lurking.
Sail on brother
Darlene
Comment Share
Share via:
L

Posted May 02, 2021 at 08:42pm
Gilbert, you touched my life in many ways. I am so fortunate to have met you and spent time with you. You were always helping repair broken items .. sometimes broken people . You enjoyed each day of life and it showed...often in the smallest of ways. I won’t forget you and I want you to say Hello to Monsignor Fradet . L P Degree
Comment Share
Share via:
RM

Posted May 01, 2021 at 05:38pm
One of the best welders I have ever worked with. It was a true honor to have known him and worked with him. Godspeed Brother.
Comment Share
Share via:
AH

Posted May 01, 2021 at 11:03am
The entire staff of A W Rich Funeral Home wishes to express our deepest sympathy to you and your entire family during this difficult time.
Comment Share
Share via: 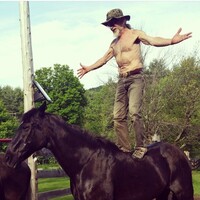 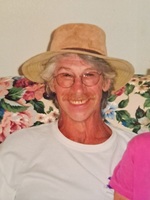