To share your memory on the wall of Michael Andrews, sign in using one of the following options:

Mike, also known as “Mickey” to many of his closest friends and family, was born June 29, 1960 in St. Albans, VT to the late Francis “Andy” and Diane (Mitchell) Andrews. He was a resident of East Fairfield for most of his life and was an attendant of St. Anthony/St. Patrick’s parishes. Mike began working for Leader Evaporator before retiring from Perrigo Nutritional after 34 years of service.

Mike had the ability to lighten any situation, make people laugh, and could talk to anybody. He was also outspoken and straight forward and didn’t sugar coat his opinions. He was a big man with an even bigger heart. He was a true family man who loved being with his family whether
for a barbecue, bonfire or helping with any projects that needed to be done. If anyone needed help with anything you never had to ask Mike twice to lend a hand. You could count on him to bring any tools needed and if he didn’t have it he’d go out and buy it to get the job done. In his younger years Mike enjoyed playing softball and basketball. He later enjoyed golfing, trips to Maine and Florida. We can’t forget how much he loved camping. To say the Andrews family camping trips always went smooth would be a laugh. Storms, floods and the time he let the kids bring the cat! Who thought that was a good idea? He definitely wasn’t one to sit around, even on a vacation. He loved any and all sports. He especially enjoyed watching his Boston Red Sox, Patriots, and the happiest while attending Boston Bruins games with Renée and Anthony. He had a special place in his heart for his grandson Anthony and all their endeavors together.

He is survived by his loving wife Renée (Garceau), his daughters Samantha, Whitney/Tyler Gervais and son Jordan/Amanda. He adored all of his grandchildren Anthony, Brayden, Landon, Bailey, Lily, Jordan, Rylee, Gabe and Roslyn. He also leaves behind his in-laws. Rene/Betty Garceau. His brothers-in-law and sisters-in-law Russell/Suzette Garceau, Steven/Kara Garceau, Shane/Jen Garceau and Derrick/Keeli Garceau. Special nieces, Ashley, Lauren-Kate, Jade, Jyllian, Myah, Vivien, Victoria, Vera and nephew Garrett. Special and longtime friend Andre Viens with whom many fun and memorable times were shared. Aunts and Uncle, Howard/Joyce Mitchell, Wayne/Carolyn Mitchell, and his rock and special aunt, Marilyn Farr. Special niece Heather who he was proud of all her accomplishments. Many cousins, including his close cousin Richard/Gail Mitchell. Sister Kim and brother Peter and niece Cayla Andrews.

He was predeceased by his father Francis, mother Diane and sister Virginia Andrews.

Funeral services will be private and held at the convenience of the family. There will be no visiting hours. Internment will take place privately in the Andrews family lot at the Sanderson Corner Cemetery in Fairfax.
Read Less

We encourage you to share your most beloved memories of Michael here, so that the family and other loved ones can always see it. You can upload cherished photographs, or share your favorite stories, and can even comment on those shared by others.

Flowers were purchased for the family of Michael Andrews. Send Flowers

Posted Apr 22, 2021 at 12:11pm
My deepest sympathy to Mike’s family. I worked with him for many years at Wyeth/Perrigo, where he is sorely missed. He was such a friendly, caring person.
Comment Share
Share via:
PM

Posted Apr 21, 2021 at 11:51am
I had the distinct honor of working with Mike for many years at Wyeth/PBM/Perrigo, and I can tell you that you will never find a more dedicated, passionate or talented fellow. When significant problems arose that had most of us stumped, Mike was the 'go to' man for troubleshooting and corrective actions...and he was ALWAYS willing to help, 24/7.
But much more that that, Mike was a true friend who would always extend a hand, and who was always looking out for the little guy in life. I am a much better person for having known Mike and followed his example of how to treat others. Life has lost a good bit of its' luster for many of us who loved him dearly.
My sincere sympathies and prayers to Renee, Samantha, Jordan, Whitney and all his grandchildren. He shared many stories through the years of his love for you all.
Comment Share
Share via:
MM

Posted Apr 20, 2021 at 02:42pm
I am so sorry for your loss Renee thinking of you and your family at this difficult time. I knew Mike when he worked with my dad at Leader Evaporator such a great guy. RIP Mike
Comment Share
Share via:
HS

Posted Apr 20, 2021 at 08:39am
Please accept our most heartfelt sympathies for your loss... Our thoughts are with you and your family during this difficult time.

Flowers were purchased for the family of Michael Andrews. Send Flowers 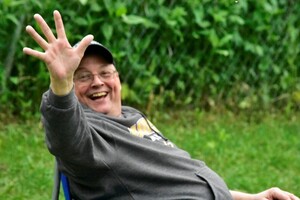