To share your memory on the wall of Robert J. \"Bob\" Magoon, sign in using one of the following options:

Provide comfort for the family by sending flowers or planting a tree in memory of Robert J. "Bob" Magoon

Provide comfort for the family by sending flowers or planting a tree in memory of Robert J. "Bob" Magoon

Print
Robert J Magoon (Bob) peacefully passed at the age of 82 on March 1st, 2021 at UVM Medical Center. He was born February 26, 1939 in Stowe, VT to the late Donna and George Magoon. He married Betty DiCecco in August 1961.

Robert attended ... Read More
Robert J Magoon (Bob) peacefully passed at the age of 82 on March 1st, 2021 at UVM Medical Center. He was born February 26, 1939 in Stowe, VT to the late Donna and George Magoon. He married Betty DiCecco in August 1961.

Robert attended and graduated Burlington High School. He joined the Army National Guard after graduation, serving for 40 years. Robert was on the Colchester Volunteer Fire Department for many years. He also worked for the State of Vermont at Camp Johnson until retirement. Robert worked for the local schools as an electrician and plumber for approximately 10 years.

Robert was predeceased by sisters Julia Monta and Coralie Magoon. He is survived by his wife Betty Magoon, sister Jean Penoyer (Charles) and kids Timothy Magoon (Michele), Linda Viau and Bruce Magoon, and grandkids, Elizabeth Charbonneau (Stephen), Francesca Veno (Jess), Andy Girroir, Michelle LaBarge (Jesse), Matthew Viau (Brianna). They will remember him as a loving husband, brother, father and grandfather. They will forever cherish the many memories they have of fishing, canoeing, camping and skiing with him.

Services will be held at United Church of Colchester on Friday March 12th, 2021 at 10am. Due to COVID-19 restrictions the service will be for immediate family only with streaming on YouTube for those who wish to view. The url is as followed: https://www.youtube.com/watch?v=BFXxyuHsU4Q

The family also invites you to view further information and share your memories and condolences by visiting www.awrfh.com.

I thought I would write some thoughts about my father. Actually, I was going to recount his life history as I know it, but I didn’t want to put you to sleep. So here are some memories of my father in condensed form.

I remember being 8 or 9 and my father waking me up at 3:30 in the morning to go hunting with him for the first time. “Get up if you’re coming with me” he whispered to rouse me from my sleep. My stomach was doing flip-flops around the butterflies from being excited and awake way too early. It was Thanksgiving morning. We did see a deer, a yearling my father said. We were able to hear the mother call to it from out of sight from us. The yearling stood there looking at us, then at its mother, and back again, before trotting off after its mother.

My father use to smoke, quitting during his angioplasty procedure in 1990. But to this day, when I smell cigarette smoke, I’m reminded of being on ridgetop, again, hunting with my father, and he lighting a cigarette to ‘determine wind direction’.

I remember going over to the shop (Camp Johnson) to help my father work on the car (never took it to a mechanic) and as I got older, helped me with mine. Always ready to help whenever he could.

I was helping a friend put a roof on his father-in-law’s house, and my father showed up to help. He helped the electrical companies get power back on up in the islands after the big ice storm (’98 or ’99). He worked with Trout Unlimited rebuilding riverbanks, mostly on the Winooski River, volunteered with the Fish and Game department stocking trout and salmon in various streams, and of course 30+ years with the Colchester Fire Department (named as a Lifetime Member). Like I said, he helped others.

My father asked me along to stock salmon fry (very small fish) in the Browns River up near Underhill State Park. The Fish and Game Dept. was trying to establish a salmon fishery in the river (I don’t believe it worked). This is where he had his heart attack May 13th, 2000. Thank God I was with him and God bless the woman in the farmhouse nearby. Her sister across the road was a nurse at the Medical Center, and gave him aspirin to chew which saved his life while the Essex Rescue was on its way. He had triple bypass surgery and six weeks later was helping me shingle a roof on the house I had just bought in Essex. Then, 9 years later, he helped me put a roof on my house in St. Albans. He was 70 years old.

My father and I took three week-long fishing/camping canoe trips to the Adirondacks one to Fish Pond, and two to the Fish Creek area. Fishing in the morning and evening, and talking the rest of the day. We got most of the world’s problems solved every time. Too bad nobody listened (or maybe it’s good they didn’t).
Those are the memories of my father that come quickly to the mind. He was my father for close to 60 years, and if I sat here long enough, I could come up with a book full. He was a great man to me; some one I certainly looked up to. He was loving, with a happy disposition, and never had anything bad to say about anybody. Rest in peace Dad.

Aging, getting older, is such a curse at times. You live a full life, being a loving father and husband, a good provider for the family, maybe even serve your country and/or community, and your reward is that as you get older, things start being taken away from you; your hearing, your eyesight, your mobility, your independence, your loved ones, your memory and mind. You know the greater reward awaits you upon your death, but it would be nice if it didn’t come at such a cost as you got closer to it.

Print
Services will be held at United Church of Colchester on Friday March 12th, 2021 at 10am. Due to COVID-19 restrictions the service will be for immediate family only with streaming on YouTube for those who wish to view. The url is as followed: https://www.youtube.com/watch?v=BFXxyuHsU4Q

We encourage you to share your most beloved memories of Robert J. "Bob" Magoon here, so that the family and other loved ones can always see it. You can upload cherished photographs, or share your favorite stories, and can even comment on those shared by others.

Posted Mar 30, 2021 at 01:19pm
Betty, Timothy, Linda, and Bruce, I am so sorry about the loss of your husband and father. I can tell by the obituary that he meant a lot to you as I know he did to everyone who knew him. Betty, I am sure that a big part of you is missing now knowing how long the two of you had been together. As you know Bob and I were in the fire department together. He was my commanding officer all the way up to him being Assistant Chief, which one night he enthusiastically gave up to me. As you wrote, Bob was always there unless work took him out of town. Those of us who grew up and still live on Main Street— “The Center” as my Grandmother would call it—are slipping away sadly, as are some of those memories.

Posted Mar 08, 2021 at 02:56pm
Condolences. Bob was a rock who could be counted on. The Military Department / Vermont National Guard were fortunate to have him for so many years.
Tom O’Donovan. Deputy AdjGen Vt Rtd
Comment Share
Share via:
LA

Posted Mar 07, 2021 at 01:31pm
I have known Bob since I was 13 years old. He was the embodiment of a Christian in everything he did and said. I especially enjoyed his heart for service on our missions commission at church. He delighted in bringing in fresh fruit for our Thanksgiving food baskets and making a beautiful crèche to display outside our church for Christmas. He was always up for lending a helping hand no matter what. I’ll never forget a young girl in our church going to sit by his side during the service. I send sincere condolences to Betty, Linda and Bruce and the rest of the family. He was a true servant of Christ. May he Rest In Peace.
Comment Share
Share via:
PS

Posted Mar 06, 2021 at 10:27am
I first met Bob over 12 years ago through the RehabGym. Right away I knew he was a kind-hearted, genuine man who was always so cheerful and positive. I continued to see Bob off and on through the years and never did he lose his optimism. I so enjoyed my encounters with Bob; he was a wonderful human being. My sincere condolences to Betty, Linda and Bruce. I am so glad I had the opportunity to meet Bob Magoon.
Comment Share
Share via:
AH

Posted Mar 05, 2021 at 11:54am
The entire staff of A W Rich Funeral Home extends our deepest sympathy to you and your entire family during this difficult time.
Comment Share
Share via: 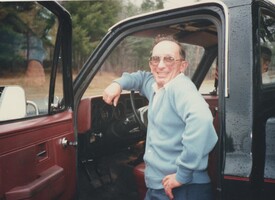 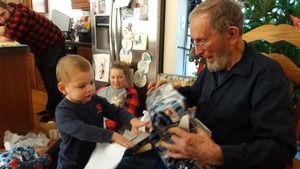 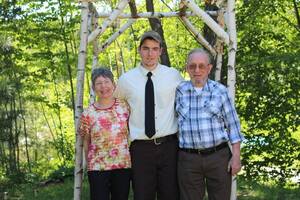