To share your memory on the wall of Arlene Irene (Erno) Jones, sign in using one of the following options:

Arlene and her husband operated Jones Service Station for 34 years, first by the wrong way bridge and then in the center of town.

There will be no services at this time. A graveside service will be held in the Spring at the convenience of the family in the family lot in Mountain View Cemetery, Cambridge. Memorial contributions in Arlene’s memory may be made to Lamoille County Home Health & Hospice, 198 Farr Avenue, Morrisville, VT 05661. The family invites you to share your memoires and condolences by visiting awrfh.com.
Read Less

We encourage you to share your most beloved memories of Arlene Irene (Erno) Jones here, so that the family and other loved ones can always see it. You can upload cherished photographs, or share your favorite stories, and can even comment on those shared by others.

Posted Mar 12, 2021 at 10:54am
We were fortunate to have both Arlene & Carroll as neighbors for many years. Such hard working people, always a smile, a kind word, and often a joke to share when we'd stop in at the garage. Our heartfelt condolences being sent to the family, may your memories of happier times comfort you all in the days ahead. Rest in peace Arlene, you will be missed !
Ted & Doreen Conrad
Comment Share
Share via:
AM

Posted Mar 05, 2021 at 01:53pm
We were so saddened to hear of Arlene's passing. She had a strong constitution and endured much suffering throughout her life time. The last opportunity we had to visit was outside of Rich's funeral home and it was a good visit. Through the early years of our marriage, I had many opportunities to seek her guidance sharing the position of bookkeeping in the garage business. We offer our sincere condolences to her family at her loss. Heaven has welcomed her and she now sits with the Lord.
Art & Melody
Comment Share
Share via:
DH

Posted Mar 02, 2021 at 05:17pm
The entire staff of A W Rich Funeral Home wishes to express our deepest sympathy to you and your entire family during this difficult time.
Comment Share
Share via: 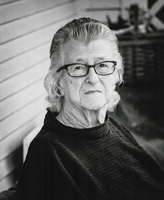