To share your memory on the wall of Joan Charlotte (Johnson) Allen Murphy, sign in using one of the following options:

Joan was born on Jan 14, 1937 to James G. Johnson and Charlotte B. Fairbanks in Portland, Maine. She was the eldest of five siblings.

Joan graduated from Portland High School in 1956 where she was extremely active and very well liked. She was a cheerleader for four years and head cheerleader her senior year. She was also captain of the swim team, and a member of the softball and volleyball teams. She had the lead role in her senior class play “Professor, How Could You?” She received a full scholarship from the Zonta Club to attend Mercy Hospital School of Nursing where she would eventually receive her first job as a clinical instructor. She did her pediatric affiliation at the Children’s Hospital in D.C. and psychiatric affiliation at Seton Institute in Baltimore, MD. She then went on to attend Boston University and Boston College for additional nursing studies.

She married her high school sweetheart, Walter Allen, in 1961. They had two children together, Michael and Lori. Walter passed away of a brain aneurysm in 1970. Joan then married Joseph J. Murphy, Jr. in 1971 and moved to Castile, NY to attend Elohim Bible College. They had a daughter, Rachel, in 1973. They graduated in 1974 and moved to VT where they would minister together for the next 35 years at Grace Bible Church, a little country church outside of Stowe. She wore many hats during her years there; Sunday school teacher, luncheon organizer, landscaper, janitor, and decorator. She was also hired by Olive & Tom Watson, founder of IBM, to care for their chalet at Spruce Peak for 25 years.

In 2009 she retired with her husband to an in-law apartment with their daughter, son in-law and family in Essex Jct., VT. They continued to minister to everyone they met there. They led and participated in multiple Bible studies with friends and neighbors. Joan had such a passion for baking and gardening and still took care of her family’s needs, especially the laundry! She loved the ocean and thought there was no better place to vacation than the state of Maine. She enjoyed planning early for the holidays and loved to see the snow come. She was an avid snowshoer, getting out 53 times last winter!

A celebration of her life will be held at a later time when all of her family and friends can attend safely. The family invites you to share your memories and condolences by visiting www.awrfh.com.
Read Less

We encourage you to share your most beloved memories of Joan Charlotte (Johnson) Allen Murphy here, so that the family and other loved ones can always see it. You can upload cherished photographs, or share your favorite stories, and can even comment on those shared by others.

Posted Feb 28, 2021 at 04:40pm
My sincere sympathy to Joan and Joe's family. I first met Joanie in nursing school at Mercy.. We shared many memories and good times during those years. She and her first husband introduced me to Wally's cousin Dickie McDonough and we had fun planning our first weddings and sharing the early years in the 60s. Many years ago I visited her in Stowe and we had a fun time sharing again with Laurie. Many blessing to all. I will miss the annual Christmas letter with all the years news. Sheila Foley McDonough Brown
Comment Share
Share via:
GP

Posted Feb 27, 2021 at 11:49am
Our sincere sympathy to the Johnson Family. I remember Joan as a cheerleader at Portland High. Our prayers are with you. Sandra and Guido
Comment Share
Share via:
C

Posted Feb 24, 2021 at 02:00pm
One of my earliest memories of Nana was when we would visit VT on our family vacations. My Opa took my mom, dad and brother golfing while Nana gave my sister and I our first taste of coffee! It was Green Mountain Blueberry (with mostly milk) in her beautiful glass Irish coffee cups and a biscotti to dip. She always made us grandkids feel so special!
Comment Share
Share via:

Posted Feb 24, 2021 at 12:56pm
Loved my sister beyond words. Loved that she introduced me to Creamies. Never go to Vermont without having one. (Or two). I’ll see her again when the time is right and God us ready for me
Comment Share
Share via:
AH

Posted Feb 24, 2021 at 10:54am
The entire staff of A W Rich Funeral Home wishes to express our deepest sympathy to you and your entire family during this difficult time.
Comment Share
Share via: 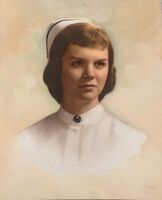