To share your memory on the wall of Bruce Santaw, sign in using one of the following options:

Bruce was born in 1951 and adopted by his loving parents Lawrence (Stubby) and Katherine (Kay) Santaw in North Troy Vt. He grew up with an older brother and surrounded by cousins. He was interested in building things from an early age which resulted in him taking Building Trades at NCUHS where he attended high school. A close friend in high school led to him dating the woman who would become the love of his life (his friend’s sister) Janice Cote. After high school during a courtship he would travel to Fanny Allen Hospital, where Janice was attending nurses training to see her. They were married in April of 1972.

Bruce was a carpenter by trade owning his own business, Santaw Builders. He bowled in several league’s, both for couples and mens. He played guitar and sang, often times making up the words if he couldn’t remember them. He was someone who liked to have fun, always teasing and trying to make people laugh. He was also known to be quite the BSer, oftentimes leaving people to wonder if he was being serious or not. He also was not one to hold back on his opinion.

Bruce treasured his family especially his wife, daughters and grandchildren (1 boy, 7girls including two sets of multiples). He enjoyed spending time with dear friends as well as attending his grandchildren’s sporting events or performances they participated in. He found pleasure in hosting an annual Santaw Pig Roast, sitting outside at home enjoying the view, going to airshows with Richard (who was like a son to him), traveling with his wife and brothers-in-law, spending time at camp with family, carpentry, and watching Celtics, Bruins, Red Sox, and Dallas Cowboys occasionally followed by a phone call from his brother containing teasing and laughter. Because his family was so important to him he thoroughly enjoyed doing things for his wife, daughters and grandchildren. Supporting them in everything they did, simply spending time with them, writing letter puzzles on the back of birthday and Christmas cards and his ongoing banter with his grandchildren of “I love you most”.

He leaves behind his mother-in-law Iris (Davis) Cote of Jay, daughters Sheila Burger of Jay and Samantha Santaw-Wright and spouse Robert Wright of Lowell, brother Wayne Santaw of Charlestown, brother-in-law Winston Cote of Jay and sister-in-law Jocelyn and spouse Arny Willey of Morrisville, grandchildren Savannah, Riley, Amelia, Alexis, Alicia Burger, Jordan, Faith and Destiny Wright, Many nieces, nephews and cousins. And like a son to him, Richard Gilbert, fiancé Racheal Morse and their daughter Natalie, all of Vt.

He is predeceased by his wife Janice (Cote) Santaw formerly of Jay, Mother and Father Katherine and Lawrence Santaw formerly of N.Troy, Father-in-law Donald Cote formerly of Jay, Brother-in-law Ronald Cote and his beloved St. Bernard Mike formerly of N.Troy, all of Vt.
His family would like to say a special thank you to the first responders, Doctors, Nurses and anyone who tried to make his journey from the accident on, a safe and comfortable one, as well as the many prayers, thoughts and acts of kindness received.

There will be no services held at this time due to COVID-19 restrictions. A celebration of life will be held in late spring.
Read Less

We encourage you to share your most beloved memories of Bruce here, so that the family and other loved ones can always see it. You can upload cherished photographs, or share your favorite stories, and can even comment on those shared by others. 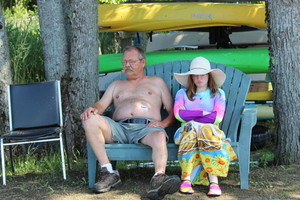