To share your memory on the wall of Jack Corse, sign in using one of the following options:

Jack attended Cambridge Elementary and graduated from Lamoille Union High School. As a young man, he could be found much of the winter skiing every downhill slope at Smugglers Notch.

After high school, Vermont felt small to Jack – the west was calling. He decided to attend college in Reno, NV and Ft. Collins, CO, but as it turned out, his love for skiing and the thrill of working were much more important to Jack. His time out west, like so much else he did, was an opportunity for adventure and to meet new friends that would become family. Although Jack enjoyed his years out west, Vermont was where his heart was. He returned to Cambridge Jct. to work alongside his parents, his brother Jerry and his Uncle Henry in the family fuel business. Jack eventually bought the business and grew Jack F. Corse Inc. it to what it is today, a well known local family business. He was a well respected and accomplished businessman and beloved leader to a dedicated and talented staff.

Jack was an active member of the Vermont Fuel Dealers Association, a past member of Cambridge Area Rotary, National Skeet Shooters Association and various other community organizations. He took great pride in knowing he could drive any vehicle except a school bus. He loved to travel and especially loved the ocean, whether on a boat catching fish or hanging out on a nude beach with his wife Cary. He enjoyed multiple hunting adventures and NHL games with friends. He spent countless hours watching Griffin and Mallory’s soccer, basketball, lacrosse and volleyball games.

Jack always knew how to solve any problem. Whether navigating on sea or land, moving a piano or painting a high peak on a house he didn’t own, he would figure it out. He was a man of many talents, a brewmaster, sugarmaker, captain of his own charter boat, an accomplished skeet shooter and a generous community member with a loud voice and a big heart.

Jack became a horse racing enthusiast of late. He would win many bets but not fully account or admit to his total losses. He was bigger than life itself. He was happiest in a truck or with his beloved family and his two new sweet grandsons. Jack would often quietly express how proud he was of his son and daughter who carry many of his endearing characteristics.

Drive-thru visiting hours will be held at the family home, 1332 Bryce Road, Cambridge from 11:00 a.m. – 1:00 p.m. on Wednesday, December 30, 2020. Masks and social distancing requirements will be followed. Inurnment will be at the convenience of the family. Memorial contributions in Jack’s memory may be made to _Jenna’s Promise-1159 Foote Brook Rd., Johnson, VT 05656 or Lamoille Area Cancer Network – 198 Farr Ave., Morristown, VT 05661. You are also invited to share your memories and condolences by visiting awrfh.com.
Read Less

We encourage you to share your most beloved memories of Jack here, so that the family and other loved ones can always see it. You can upload cherished photographs, or share your favorite stories, and can even comment on those shared by others.

Posted Dec 27, 2020 at 06:51pm
Cary, Griffin, and Mallory, We are thinking of you at this difficult time. We will keep you in our thoughts and prayers. Jack will be missed dearly

Posted Dec 26, 2020 at 07:00pm
Dear Cary, Griffin and Mallory, We were so saddened to hear of Jack's passing. How lucky for us to have been his friend. With heartfelt condolences.

Posted Dec 25, 2020 at 12:55pm
Please accept our most heartfelt sympathies for your loss... Our thoughts are with you and your family during this difficult time.

Posted Jan 05, 2021 at 08:07am
Condolences from Joel and Amy Messier. We met Jack via our past General Store and he always had a smile and a good story. We are sorry for your loss and wish you peace.
Comment Share
Share via:

Posted Jan 01, 2021 at 12:06pm
I met Jack years ago in front of the Base Lodge at Smuggs'. I don't remember what we talked about but I believe he was not happy with something but it was apparent he cared a lot in his gruff sort of way.
A few years ago Tom Wykoff and I got roped into building a deck on the front of the Varnum Memorial Library and Jack in his usual generous self offered his excavator and truck to help us. When we told him we were building the deck around the tree in front of the building, he told us in usual gruff way that we should just get rid of the tree... Tom and I just looked at each other and thought: Jack your mother will reach out of her grave and grab your leg and shake you if we cut that tree down and her friends that are still alive will definitely make our lives miserable if we do their tree in... Jack just grumbled and left Griffin to work with us and we worked around the tree.
I will always think with a smile and fondly remember a gruff, opinionated and vocal guy who had a huge warn heart.
Peter Ingvoldstad
Comment Share
Share via: 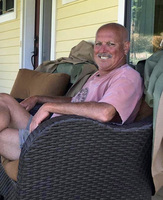