To share your memory on the wall of Patrick Ray, sign in using one of the following options:

Print
Patrick Ray Jr. of Essex Jct., Vermont passed away on November 26th, 2020 after failing health. He was 84 years old.

Patrick was born on December 15th, 1935 in Berlin, New Hampshire. He was the youngest of 8 children.

Patrick was born on December 15th, 1935 in Berlin, New Hampshire. He was the youngest of 8 children.

After high school Patrick attended Massachusetts Radio & Telegraph School. In 1956 he joined the United States Air Force and proudly served for four years. He was honorably discharged in 1960. After the Air Force he worked for Philco Computer Division in Willow Grove, PA for 5 years then briefly for Texas Instruments RI in 1966, where he met his future wife, Estelle.

Patrick married Estelle St. George on October 8th, 1966 in Massachusetts, where Estelle grew up. They moved to Vermont, where Patrick worked at IBM until he retired after 28 years, and raised their two daughters.

Patrick enjoyed all outdoor activities, especially hiking, kayaking, camping and skiing. He hiked the complete Long Trail in Vermont, all of the mountains in New Hampshire, and many more across New England. He was a talented water-color artist and an avid ham radio operator.

In addition to his wife Estelle, Patrick is survived by his children, Kelley and husband Ken Robie, and Debbie Jenkins, both of Milton, VT. He is also survived by his grandchildren, Tyler Jenkins of Fairfield, VT, Nathan Jenkins of Milton, and Kaylee & Kiera Robie of Milton, two sisters, Nora Guay, NH, and Louise Slote, MS, many nieces, nephews and cousins throughout the United States, and his best friend George Fortuna in Nashua, New Hampshire.

A Memorial Service will be held at a later time when family and friends can attend safely.

The family invites you to share your memories, stories and condolences of Patrick by visiting www.awrfh.com.

Contributions and donations in Patrick’s memory can be made to The Long Trail of Vermont site: www.greenmountainclub.org.
Read Less

We encourage you to share your most beloved memories of Patrick here, so that the family and other loved ones can always see it. You can upload cherished photographs, or share your favorite stories, and can even comment on those shared by others.

Posted Dec 06, 2020 at 06:27am
Kelley and Debbie, You both have had a rough year. I am sorry to hear of your dad's passing. I have good memories of him when you were kids, and during my years working with him at IBM. I miss those visits with your mom when she was out for her walks. I will try to go see her when it is safer. Chuck and Aron send their condolences as well.
Charlie Blaisdell
Comment Share
Share via:
AH

Posted Dec 04, 2020 at 04:08pm
The entire staff of A W Rich Funeral Home wishes to express our deepest sympathy to you and your entire family during this difficult time.
Comment Share
Share via: 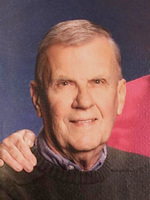