To share your memory on the wall of Matilda (Gosley) \"Tillie\" Pudvah, sign in using one of the following options:

She was born on June 3, 1924 in South Burlington, VT, the daughter of the late Fred Gosley and Lillian (Jesmine) Gosley. On October 26, 1940 she married Howard Pudvah, who predeceased her in 1986.

Tillie loved doing puzzles, going to bingo, and playing cards. She loved cooking; she was famous for making the best pies around. She lovingly made pies and donated them to her church bingo. She also enjoyed crocheting. In later years her grandson Adam got her interested in the Boston Red Sox. She made several trips to Fenway. On May 1, 2011, at the age of 86, she was voted fan of the year on Vermont Day where she met Governor Peter Shumlin and saw Adam throw out the first pitch. She very seldom missed a game and many late nights she could be heard cheering them on.

Her greatest joy was being with her family and she looked forward to holiday gatherings. Tillie will always be remembered for her sense of humor and funny stories.

There will be a graveside service in the spring and a celebration of Tillie's life after the service.
Read Less

We encourage you to share your most beloved memories of Matilda (Gosley) "Tillie" Pudvah here, so that the family and other loved ones can always see it. You can upload cherished photographs, or share your favorite stories, and can even comment on those shared by others.

Posted Dec 03, 2020 at 11:47am
My Mom and I and Aunt Rita would like to extend our deepest condolences to Tammy and her entire family during this difficult time. It was such a pleasure visiting with Aunt Matilda and you this past summer in North Troy even if only for a short time. Loved going down memory lane. She seemed like a very special lady.. Who would have guessed that long lost relatives from the past would show up on your doorstep asking to visit with Matilda. You welcomed us in and I thank you. I am attaching a photo of that great visit. Stay strong and always remember "wherever a beautiful soul has been there is a trail of beautiful memories". Love to you all from Yvonne Domina Woodward, Velma Ronfeldt, Rita Domina Tipper.

Posted Dec 02, 2020 at 10:31am
Tillie was a Dear Friend who was Loved by so many. She had a Wonderful Sense of humor, a beautiful smile, and a Big Heart. I enjoyed our time together when I would bring her to the Senior Meal sites and the talks we would have. She will be sadly missed. Love You, My Dear Friend
Comment Share
Share via:
AH

Posted Dec 02, 2020 at 08:31am
The entire staff of A W Rich Funeral Home wishes to express our deepest sympathy to you and your entire family during this difficult time.
Comment Share
Share via: 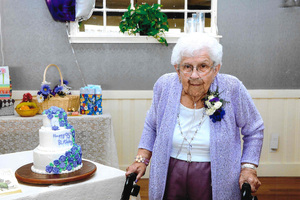 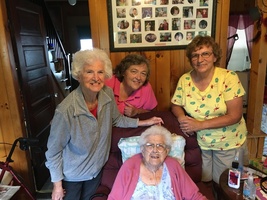