To share your memory on the wall of Theodora (Fisk)\"Thea\" Whitcavitch, sign in using one of the following options:

Print
Theadora (Thea) Fisk Whitcavitch, 69, of Cambridge, passed away peacefully on October 29, in Burlington, after a short illness. Thea was born on May 12, 1951 in Morrisville, Vermont, to Joyce and Theodore Fisk, both deceased.

Thea grew ... Read More
Theadora (Thea) Fisk Whitcavitch, 69, of Cambridge, passed away peacefully on October 29, in Burlington, after a short illness. Thea was born on May 12, 1951 in Morrisville, Vermont, to Joyce and Theodore Fisk, both deceased.

Thea grew up in Morrisville and attended People’s Academy High School. After graduation, wanting to experience life outside of rural Vermont, Thea moved to New York City, taking a job with the Global Girl Scouts. Soon, Thea’s wanderlust returned, and she moved to California for a short time, before returning to her home state. Thea and her sheepdog Friedman were familiar sights in Stowe, where she worked at the Green Mountain Inn for a number of years. Ever the explorer, Thea moved again, this time to Florida, where she worked for Sarasota County Home Health and Hospice. It was during this time that Thea discovered her interest in the healing arts and became certified in massage therapy. Later, she went on to become a Reiki Master, and was known for her ability to help heal friends, family, and pets.

Once again Vermont called to her and she moved home, this time to stay. As Thea would tell the story, she was working at the Topnotch Resort as a massage therapist, when one day, as she was walking down the hall, she bumped into her childhood sweetheart Kevin Whitcavitch. Later she would learn that Kevin had stayed at the Topnotch several weekends in a row, hoping to run into her. He asked if he could take her to dinner that night, and they have been together ever since. Kevin and Thea were married June 10, 2007 at the Three Mountain Lodge in Jeffersonville and settled into Kevin’s family home in Cambridge. After their marriage, Thea worked at Smuggler’s Notch Resort in Jeffersonville, Copley Hospital in Morrisville, and most recently was elected Lister for the Town of Cambridge.

Even after settling down, Thea still loved to travel. She and Kevin made numerous trips around the United States, Mexico, and the Caribbean. She particularly loved the island of St. John for its amazing array of fish and wildlife, hiking trails, and beautiful beaches. She and her friends made trips to Sicily and Costa Rica, where she zip-lined over the rain forest, and rafted down tropical rivers.

Thea was passionate about gardening and had some of the most beautiful flower gardens in the area. She loved her home and her pets – Jersey, Sooki, Lily, and Gertie. Thea never lost her adventurous spirit, going white water rafting in Maine in her 50’s (when she was promptly tossed out of the raft at the beginning of the rapids, she simply laughed and said she was happy that the instructors had told her to keep her nose and toes up), hot air ballooning with Kevin for their anniversary, and sky-diving for the first time on her 60th birthday.

Thea is survived by her husband Kevin, her daughter Debra Marston of Concord, New Hampshire, niece Erin Willette of Hardwick, and nephew Eric Fisk of Waterbury. She was predeceased by her brother Theodore Fisk.

Thea will be terribly missed by the many who knew and loved her.

In lieu of flowers, contributions may be made in Thea’s memory to the Sequist Animal Hospital in Morristown, Vermont.

We encourage you to share your most beloved memories of Theodora (Fisk)"Thea" Whitcavitch here, so that the family and other loved ones can always see it. You can upload cherished photographs, or share your favorite stories, and can even comment on those shared by others.

Posted Jan 06, 2021 at 03:58pm
I still cannot believe she is gone, when I think that we go back over 55 years, finally got it right and now she is gone. Love you baby, see you on the other side.
Comment Share
Share via:
JL

Posted Nov 09, 2020 at 08:00pm
Thea was a beautiful lady. I have known her since we were in first grade together in 1956. She was always a warm, wonderful, gentle and pretty lady. Though we were classmates, we never did spend much time together, but I was always very fond of her because of her lovely spirit. She is a loss to all her knew her.
Comment Share
Share via:
JJ

Posted Nov 06, 2020 at 09:21pm
How stunned we were to see Thea's obituary today in the paper. So, so sorry to hear of her passing. We'll miss seeing her in the golf cart toodling down Tanner Rd!
Comment Share
Share via:
AH

Posted Nov 02, 2020 at 05:59pm
The entire staff of A W Rich Funeral Home wishes to express our deepest sympathy to you and your entire family during this difficult time.
Comment Share
Share via:

My condolences to your family. May your memories bring you comfort. Annie Urie Cook 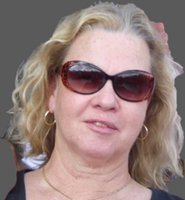