To share your memory on the wall of Thomas Fuller, sign in using one of the following options:

Print
Cambridge - On October 19, 2020 Thomas Lee Fuller passed from this life leaving a huge hole in his family.

Tom was born on October 18, 1948 to Leslie and Marion (Wrisley) Fuller. He was raised in Underhill, VT and attended Cambridge High... Read More
Cambridge - On October 19, 2020 Thomas Lee Fuller passed from this life leaving a huge hole in his family.

Tom was born on October 18, 1948 to Leslie and Marion (Wrisley) Fuller. He was raised in Underhill, VT and attended Cambridge High School where he met Diana L. Westman, who on August 24, 1968, he made his wife.

After a year long tour serving honorably in Vietnam, where he received a purple heart for an injury, Tom returned home to Diana and eventually settled down in Cambridge, VT. There they raised three kids, daughter Lesley (John) Tricou, son Thomas (Libby) Fuller, and daughter Lori (Fred) Stevens. Tom worked in concrete construction leaving his imprint throughout Vermont.

Though Tom was known by many titles, husband, father, son, brother, friend; the most important to his life was “Papa”. Tom’s grandchildren were his whole world. They brought pure joy and happiness into his life. First born Connor Frederick Stevens was his Papa’s guiding light. Second to come was his only granddaughter sweet Sadie Elizabeth Fuller, next was Blake Thomas Stevens who always made Papa laugh, and last born Aaron John Fuller, Papa’s little superhero.

Tom is survived by his wife, kids, and grandkids, sisters Lena (Jim) Meunier and Lynda (Robin) Sweet, and numerous nieces and nephews. He is also survived by three special friends, his cousin Ralph Fuller, neighbor Marc Mallett, and good buddy Mike Brown. Lastly, he is survived by his constant companion and best friend, his dog Ty.

Tom was predeceased by his parents, brother Allen, and his dog Gracie, who’s passing broke his heart. They are together now.

Tom requested no services. His ashes will be spread in the places he was happiest: the woods, hills, and mountains.

The family request that you remember Tom with a kind and loving heart.

Donations may be made to Lamoille Area Cancer Network, P.O. Box 38, Lake Elmore, VT 05657. The family invites you to share your memories and condolences by visiting awrfh.com.
Read Less

Donations are being accepted for: Lamoille Area Cancer Network.

We encourage you to share your most beloved memories of Thomas here, so that the family and other loved ones can always see it. You can upload cherished photographs, or share your favorite stories, and can even comment on those shared by others.

Posted Oct 26, 2020 at 10:24am
Lena and the entire Fuller family, we are sorry to hear of the loss of Tom. Our thoughts are with you and may one day your memories of Tom bring a smile to your face and to your heart.

Posted Oct 26, 2020 at 10:21am
The entire staff of A W Rich Funeral Home wishes to express our deepest sympathy to you and your entire family during this difficult time.
Comment Share
Share via: 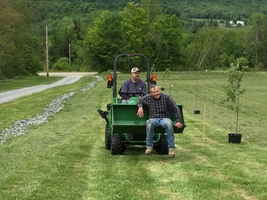