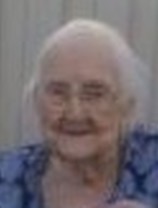 Memorial Candle Tribute From
A W Rich Funeral Home
"We are honored to provide this Book of Memories to the family."
View full message >>>
In Memory of
Bessie May
Irish
1917 - 2012
Menu
Send Flowers

Obituary for Bessie May Irish (Ryan)

Bessie May (Ryan) Irish, 94, passed away on Thursday March 8, 2012 at Birchwood Nursing Home in Burlington. Born in Merrimac, MA on October 19, 1917, she was the daughter of the late Basil and Bessie May (Deminie) Ryan. She married Robert M. Irish in Colchester on October 16, 1937. Bessie was a member of the Vermont Old Cemetery Association. She retired from Williston Central School, where she was employed as a tutor for the learning disabled. Prior to that, she was employed at the Baird Center for children and as a nurses aide at the Mary Fletcher Hospital.

She leaves behind: her daughter Cynthia Badger and husband Michael of Essex Junction; her four sons: Adrian and wife Karen of Ferrisburgh; Jerry and wife Ginny of Brattleboro; Dwight and wife Debbie of Monkton; Brian of Brattleboro; a daughter-in-law Nellie Irish of Rutland; fifteen grandchildren; twenty nine great grandchildren many nieces, nephews and cousins.

Visiting hours will be held on Sunday March 11, 2012 from 2-4 PM at A. W. Rich Funeral Home – Fairfax Chapel, 1176 Main Street, Fairfax, VT. A Funeral Service will be held on Monday March 12, 2012 at 11AM in the United Church of Fairfax with Reverend Elizabeth Griffin officiating. Burial will follow in the family lot in Fairfax Plains Cemetery. Memorial contributions in Bessie’s memory may be made to the Vermont Old Cemetery Association C/O Tom Giffin, 61 East Washington St., Rutland, Vt. 05701. Online condolences may be offered by visiting www.awrichfuneralhomes.com.